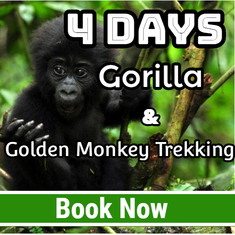 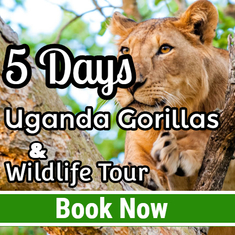 Gorillas; Bwindi has the biggest population of Mountain Gorillas in the world harboring approximately 340 gorillas of which 116 of the estimate are habituated. Just like humans, Gorillas are intelligent, majestic, gentle giants that share over 93% of their genetic material with humans. All of the habituated gorillas in Bwindi forest are known individually by the rangers and have been given names in order to identify them. The males can weigh more than 500lb where as some silverbacks exceed 6ft!

Other Forest Species; Bwindi has over 120 mammal species living in the forest, making Bwindi second in mammal numbers compared to the wilderness of Queen Elizabeth National Park. The eleven primate species found here include black-and-white colobus and L’Hoest’s monkeys, baboons and chimps. There are also forest elephants and several species of antelopes. Of Bwindi’s 200 butterfly species, 42 are endemic to the Albertine Rift.

Birds; The birds in Bwindi offer one of the best birding experience in Africa, and is an unmissable destination for any birder visiting Uganda. There are an estimated 350 bird species with 23 endemic to the Albertine Rift and 14 recorded nowhere else in Uganda. Globally threatened species such as African Green Broadbill and Shelley’s Crimsonwing are also found here. The park also harbors many other more birds of various species.